At BookCon 2019, Bardugo said that for the first season of the TV show, they are going to be combining the first Six of Crows book with the first Shadow and Bone book.

Welcome! This post is part of my Most Interesting Questions series, which means I’ll be answering the most interesting questions I can find or think of on Six of Crows and Crooked Kingdom by Leigh Bardugo. The Six of Crows characters are some of the most lovable in epic fantasy, in my opinion. Leigh Bardugo wrote Shadow and Bone first; it takes place in the same world as Six of Crows, but many people start reading at Six of Crows first. There is a Netflix series coming up. These two books are duology, which means that there are only two books in the series, though there may be a Six of Crows book 3 coming at some point in time, more on that lower down the page.

By the way, if you’re wondering about who I am, I’m an author from Portland, OR. I write epic fantasy and children’s science fiction.

Here are the most interesting questions about the Six of Crows duology: 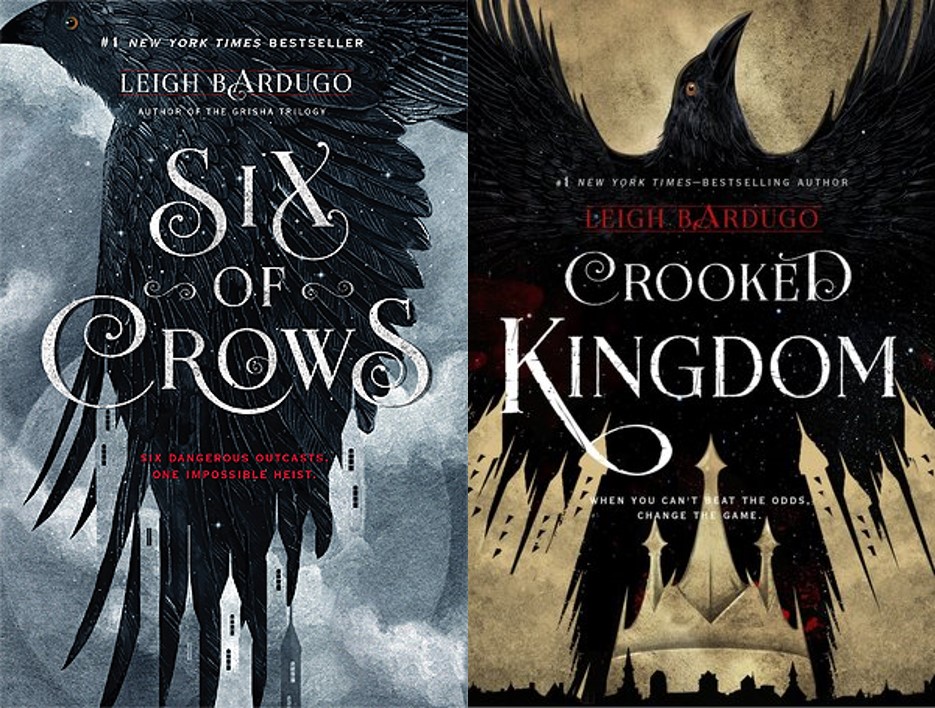 Q #1: As a beginner in fantasy novels is Six of Crows a good read?

A: Yes, it’s a great read for a beginner! It’s a YA novel and the writing is easy to understand. I read it fairly quick, in about a week. It’s also an engaging story, with a cool magic system, and Bardugo does an excellent job of plotting the novel so that the twists and turns feel real and surprising.

Q #2: Who is your favorite point of view to read from in Six of Crows?

A: Definitely Inej or Kaz. I like reading Kaz’s chapters because he’s such a well-rounded character and has a dark side to him that other characters don’t have. He takes everything super seriously, and as the leader of the gang he usually deals with the problems that have the most stakes, so his chapters often feel like the most productive and important. Inej, on the other hand, is interesting simply because she’s the Wraith. She doesn’t have darkness inside her like Kaz does, but she can accomplish things no one else can, and like Kaz, she takes everything seriously. Because she often can’t be replaced on missions, her chapters feel critical.

Q #3: What happened to Nina after Leigh Bardugo’s Crooked Kingdom?

A: I’m going to try to answer this without giving away spoilers. Nina undergoes some changes in Crooked Kingdom, if you’ve read the book you will know what those changes are. It’s partially explained, but not completely. Presumably, she is going to find out more about that because of where she’s going by the end of the book. It seems like we’d need a third book to really get a conclusion to what happens to Nina, as beyond some surface level stuff, these changes have not really been explained.

Q #4: Is there a third book of Six of Crows series by Leigh Bardugo?

A: Right now there’s not! It just goes 1. Six of Crows 2. Crooked Kingdom. However, I was at BookCon 2019 and attended a panel where Leigh Bardugo spoke about the books. One of the things she did address was the possibility of a third book. She said that she’s always imagined writing a third book, and would like to, but that her schedule is packed right now with other projects. She said that if we (the fans) are still around in a few years and interested in a third book she would write it. So presumably there will be a third book in a few years, as long as the series’ popularity doesn’t unexpectedly plummet. In the meantime, I’d like to shamelessly plug my own book Sand and Smoke. It’s also an epic fantasy book, but set in a world with dragons, and like Six of Crows it follows a group of criminals, but in it they seek to stop a devastating weapon.

Q #5: Are the main characters in Six of Crows bad people (like Kaz Brekker) or are they normal people in unlucky situations?

A: I think whether or not they’re bad people is subjective. One of the things Bardugo does a great job of is showcasing how bad the world these characters live in is. Compared to the rest of the Barrel, Kaz and his crew are like saints. Compared to most people that you or I encounter on the planet earth, they’re not so great. But I think what still makes them likeable characters is that they were just normal people who found themselves in unlucky situations. And those unlucky situations have led them to become bad. But each of these characters wouldn’t be bad if the world hadn’t been bad to them first.

A: It’s not going to be made into a movie, as far as I’m aware. However, it is in the process of being made into a Netflix TV series. When I was at BookCon 2019, Leigh Bardugo also spoke some about this. She said that she’s been very involved in the process (she’s an executive producer) and she sounded really pleased about who they cast in the lead roles (it sounded like they had already cast the lead roles, though she did not name any names and as far as I’m aware it’s not been made public). She also mentioned they were doing something unique with the TV series. At BookCon 2019, Bardugo said that for the first season of the TV show, they are going to be combining the first Six of Crows book with the first Shadow and Bone book. She sounded very confident that the decision to combine the books into one for the TV show is going to work out great, though I myself am curious to see how it’s going to work given that they take places at different times.

Thanks for reading! Now I invite you to check out more MIQ posts below, or my book Sand and Smoke, which is also an epic fantasy, with lots of action and a ragtag group of criminals, and draws inspiration from Six of Crows in some ways. Sand and Smoke also features a bunch of dragons, and I had a blast researching dragon mythology for the book! It’s going to be a trilogy.