One of the things I really enjoyed about the first two books in The Century Trilogy was seeing life and the struggles of ordinary people in world wars 1 & 2.

I’m veering away from sci-fi/fantasy this month to look at a trilogy of historical fiction books. 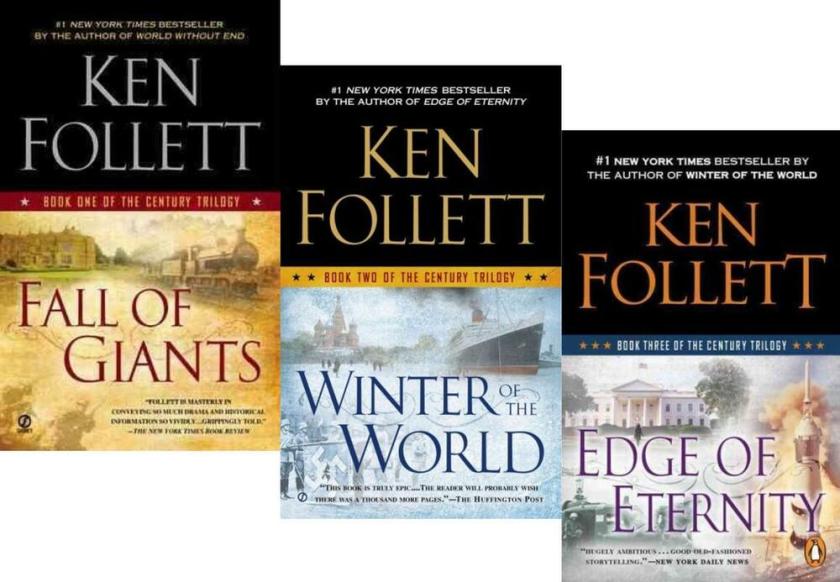 A: I’d say they are very historically accurate. I have a friend who is a history buff and he’s the one who recommended them to me. I don’t think he would have done so if they weren’t historically accurate. Also, Ken Follett puts a little disclaimer in the back of all the books. In each of them he uses a mixture of fiction characters with real characters. He only places the real characters in situations or locations where they either are known to have been at a specific time, or could have been at a specific time according to public knowledge. Ken Follett also consults experts on the various time periods he writes about – you can see who he consults in the acknowledgements section at the back of each book.

Q #2: Did anyone make a movie about Ken Follett’s Century Trilogy?

A: Not yet, as far as I am aware. However, according to Ken Follett’s website, Sony Pictures and ABC are working on making it into a TV series: https://ken-follett.com/faq/

A: I’ll do my best to answer this, though I don’t live in Britain, and have only been once, when I studied abroad from January-May in college. During that time, I didn’t really get to know a whole lot about British politics, so most of what I do know comes from films or other books I’ve read, which may or may not be accurate. I do remember seeing the film Darkest Hour a year or so ago, which seemed to depict a similarly stagnant and stubborn political landscape. In it, Winston Churchill has to fight tooth and nail against politicians who don’t want to go to war against the Nazis. Since I live in America, I know a lot more about American politics, and I will say that many of our politicians are stagnant & stubborn, so I don’t think those are necessarily traits unique to British politicians. In America it seems like every other day one politician or another is saying that something is too ambitious or radical to be passed, and we should aim for a more moderate solution. I think part of that is the nature of good politics, the other part might be some sort of selfishness or greed. The argument for things being stagnant is that if change happens too fast there’s a risk it can be the wrong sort of change. The government has a responsibility to make sure its people are cared for, and if something changes that makes things worse for the people, it can be worse than no change at all, especially if the people are already generally well cared for.

Q #4: What are your thoughts on Ken Follett’s The Century Trilogy?

A: I think it is a solid read! The characters are very easy to relate to, and the history is written in a really appealing and educational way. However, I do feel that the third book in the trilogy was a little too spectacular. One of the things I really enjoyed about the first two books in The Century Trilogy was seeing life and the struggles of ordinary people in world wars 1 & 2. By the third book, a lot of these ordinary people have produced extraordinary children, and at times things that happened seemed cheesy or too convenient to happen in real life.