Welcome! This post is part of my author blog. If by chance you find yourself here, wondering who I am, I’m an author from Portland, OR. I write epic fantasy and children’s science fiction. Feel free to check out my books using the menu bar above!

This month I am participating in Nanowrimo! Even though I am a chronic write-aholic, I thought I would give it a go just to be involved a bit more in the writing community, rather than being very hobbit-like about my writing. Which I usually am. But though I’ve got 49,200 words already written for the month (don’t judge me, I write like a cat sheds) I really don’t think I’ve spoken with anyone else who’s doing Nanowrimo all month. Or if I have, I haven’t spoken to them about Nanowrimo. Anyway, I’d done Nanowrimo twice in the past, once I failed and once I succeeded, so despite my bragging about being a write-aholic I can occasionally fail to get the words out too. The point I’m trying to get across is that I would love to speak with others who are doing Nanowrimo just because connections and community.

But beyond Nanowrimo this month, I’m going to be trying a whole bunch of new things in my writing plans regarding my books and I’ve been gearing up for them! The first of those was that I purchased a brand new epic cover for my fantasy novel titled Sand and Smoke. My last cover was self-designed, and so I think this one looks a whole lot more professional! And it’s on display below using a 3d mockup. 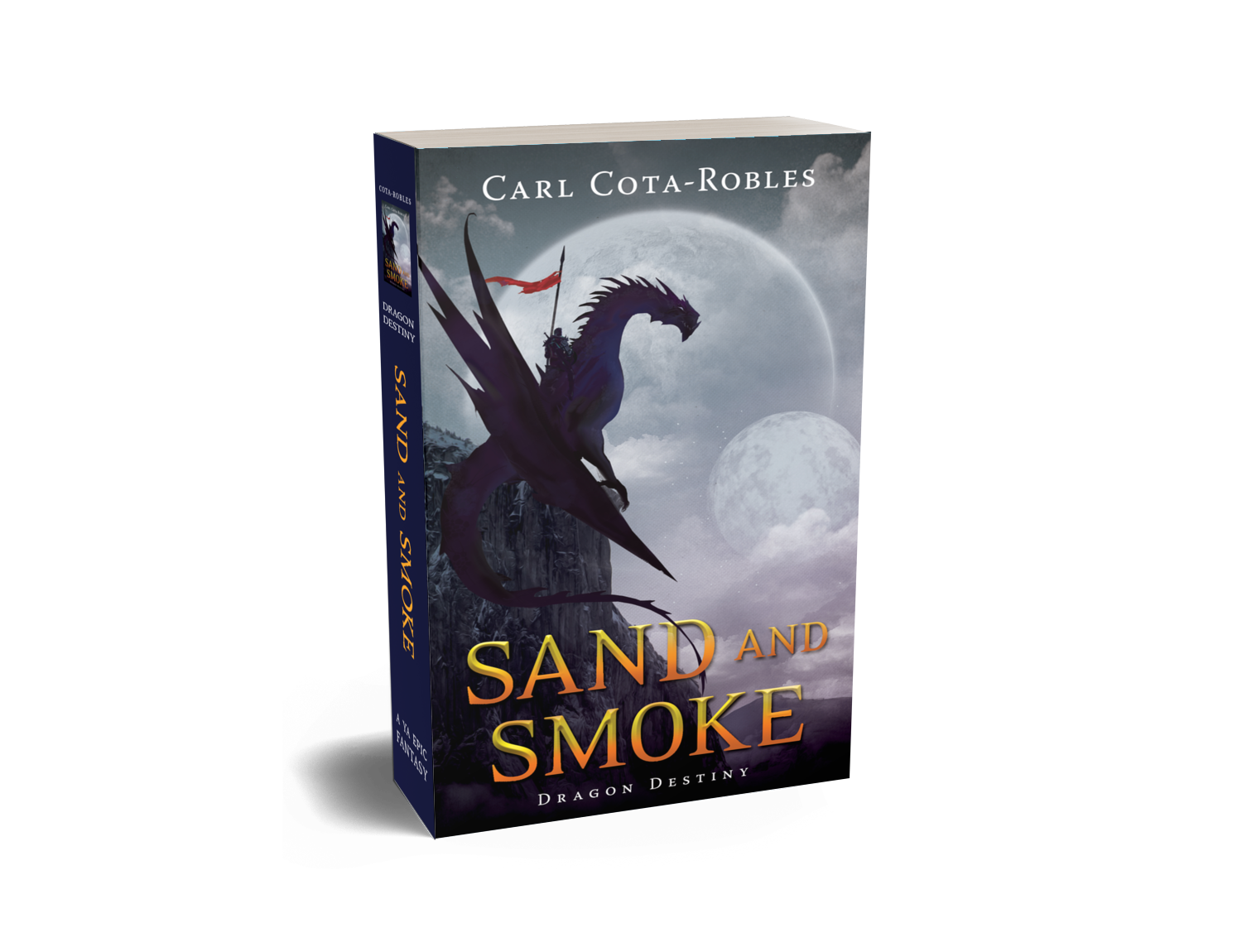 Also I wrote a short story to accompany the novel. If you want to read the short story and find out everything there is to know about this awesome dragon-infested world I’ve created, all you need to do is subscribe to my mailing list, and I’ll send it to you for free: https://www.rebrand.ly/ingridrising.

My book Middle School Robots is gonna be exclusively available for my mailing list subscribers in January, and then later on I’ll be publishing it, I’m not sure exactly when yet.

Oh, and I am going to be doubling down on my efforts at writing and publishing YA fantasy books, probably ones with lots of dragons in them. Honestly I am feeling pretty good about what I’ve accomplished so far in writing and publishing TWO full books, completing a first draft for a third book (School Robots), and completing over three-quarters of the first draft for a fourth book this month for Nanowrimo, since roughly April of 2018 when I started all of this bonanza.

But despite the fact that I’ve written pretty much what I’ve aimed to, I know that I need to write faster and write more, especially in completing some of the series I started. With that in mind I have a kind of bold goal for myself in 2020, and I’m not sure if I’m going to be able to meet it, but I’m going to try hella hard. My bold goal is to write a book a month, or depending on how I feel midway through I might adjust that goal to be 10 books in 10 months with 2 rest months worked in there somewhere.

It’s gonna be hard, but I think I can do it. Nanowrimo this month is already going fantastic for me. It’s kinda ending up being the warm-up exercise. Now that I’ve hit a stride with understanding how to churn material out, how to structure my writing, what genre I want to target and knowing a few subjects of things in that genre that seem to grip my readers, I think I am ready to tackle the one-book-a-month challenge for a year.

I even have some ideas for those months. The book I’m writing right now for Nanowrimo, I want to make it into a trilogy. I want to write books 2 and 3 in the Sand and Smoke trilogy. I want to revive an old book I wrote as a kid, improving upon the execution with a complete rewrite and a more distinct and engrossing world. I want to make that book into a series, five books I think. And I’m not wholly sure about the other three months, maybe I can find other writers who are just as hungry as me to team up with, or maybe I’ll think up new ideas in the interim. All in all, next year’s goal is going to be producing a lot of first drafts, which will probably mean not a lot of new publications, other than School Robots. But writing the first draft is the most enjoyable part for me at least…so it should be fun! And if I’m successful, there should be a bonanza of new publications coming in 2021. I might see if I can revise one well enough to publish next fall in 2020 also…we’ll see.